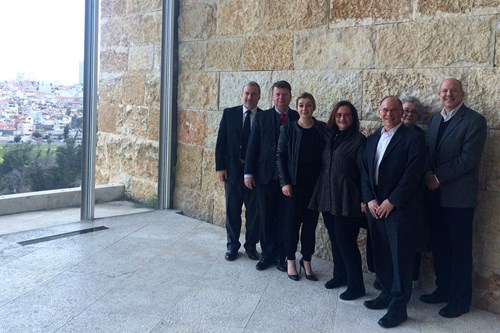 My last blog finished with an account of my visit to Chicago for the American Academy of Matrimonial Lawyers Conference in November, where I was royally entertained on the 36th floor with truffle ravioli by Chicago fellow Joy Feinberg and her husband Greg Brown, together with fellows Janet Platt and Lynda Limón and others.

The annual European Chapter Strategy meeting took place in Paris on Friday 28thNovember.   We met at the Paris Bar on L’Ile de la Cite opposite the Law Courts and were entertained for lunch nearby by CBBC (home to Véronique Chauveau and Charlotte Butruille-Cardew) and for drinks and canapés in the evening at BWG Associés (home to Beatrice Weiss Gout, Isabelle Rein and Rahima Nato-Kalfan).   The meeting was chaired by European Chapter President Mark Harper and there were 15 European Chapter Fellows present.   A lot of the discussion was about the function of IAML and the extent to which we should be involved in the law-making process, very relevant in the context of the European Instruments Committee’s response to the Brussels II proposals last year.   We also discussed the IAML initiative for a training day to deal with European instruments and European legislation generally, an area much misunderstood.   Should it be held in London, Paris, Berlin or The Hague?  More on this in due course but this initiative was greeted with significant enthusiasm all round, as were the proposed plans for the reformation of the IAML committees.   The marvellous Paris atmosphere and the beautiful offices of CBBC and of BWG made many of us feel rather envious!  The day was rounded off with a dinner in the grand surroundings of a French townhouse built in 1728.

A visit to the newly-restored Picasso museum the following day accompanied by Dorothea, Mia Reich-Sjögren and Sandra Verburgt, resulted in us bumping into London fellow Alan Kaufman and his wife Irene who were in Paris for a wedding!

On Monday 1st December 2014, immediately after the Paris trip, the first IAML/STEP event was held in London.   STEP is the Society of Trust and Estate Practitioners, a worldwide organisation of thousands of private client professionals – lawyers, accountants, trust managers etc.   It is a highly respected organisation and we have been looking to collaborate with them for some time.  This event came about as a result of a lunch I had with the Chief Executive earlier in the year.   The title of the conference was “The Family Business and Family Law”.   Much of it, for which I am hugely grateful, was organised by James Stewart.   The conference was designed both for family lawyers and for private client lawyers but principally aimed at private client lawyers in order to raise our profile among them.   The speakers were James Stewart, Mark Harper, Michael Gouriet, William Massey, Maggie Rae and Rachael Kelsey among the IAML fellows.  I co-chaired it with a private client lawyer from James Stewart’s firm, Chris Lintott, and we were also joined by Mike Mason, the forensic accountant  who had spoken brilliantly at the Budapest conference and also Lewis Marks QC who stood in at the last minute for Tim Amos QC (who had been given the wrong date, quite possibly by me!). The event was a huge success with a large audience, enthusiastic questions and great contributions from the floor, including from Sandra Verburgt from the Netherlands.  Among the audience was also fellow Christine Pasquier-Ciulla from Monaco together with her colleague.  All the speakers impressed.  This was a marvellous opportunity for IAML to raise its profile, to show the expertise of its fellows and it was all organised by STEP so it cost us nothing, including the drinks reception afterwards.  A huge thank you to all the IAML speakers – you were brilliant!

I gave an interview to the German magazine Die Welt about international family law issues which appeared in German hence it is not on the website as a news item; I had a great lunch in London with Ukrainian fellow Oksana Voynarovska who came over in early December and we talked about further expansion within Eastern Europe.

On 8th December Mark Harper and I were able to wave the IAML flag (in advance of the March Seville meeting) to a group of Spanish lawyers in London for the Anglo-Spanish Family Law conference, sponsored and largely organised by fellows Anne-Marie Hutchinson and Carolina Marín Pedreño.  The IAML brochures are really coming in handy and the audience was really interested in what Mark and I had to say, what we are doing and what we have to offer.

The day job rather took over up until Christmas but on Sunday 4th January I set off for Israel to the Israeli Family Law Conference.   On 5th January, I was joined by Joy Feinberg from Chicago and Véronique Chauveau from Paris for a tour of Jerusalem before visiting the Supreme Court in Jerusalem on the morning of 6thJanuary.  Fellows Ed Freedman and Dov Frimer had managed to set all this up for us (we were by then joined by Edinburgh fellow IAML Secretary Rachael Kelsey) and it was quite a tour.   The building, funded by Dorothy de Rothschild and designed by a brother and sister architectural team, was opened in 1992.   Although thoroughly modern, it incorporates references to centuries of building styles in the area and is packed with relevant architectural symbols.   We had a private meeting with Supreme Court Justice Hendel who has a particular interest in Family Law.   He spoke to us largely about the relationship between the rabbinical courts and the civil courts.   Ed Freedman will be providing a full report on the Israel trip and will set out more detail of Justice Hendel’s talk.

It was a great privilege to be in this environment. Justice Hendel was going to be one of the speakers at the postponed Jerusalem meeting and the only sadness was that immediate past president Cheryl Hepfer, recovering from recent back surgery, had been advised by her doctor not to make this trip to Israel; we all realised how much she would have appreciated this trip to the Supreme Court beautifully organised by Ed and Dov.

Ed had hired a sizeable Chevy in which we drove to Tel Aviv and had lunch in neighbouring – and very windy - Jaffa in a marvellous traditional restaurant overlooking the very rough  ocean with a view along the Tel Aviv shoreline.  As the weather worsened, we were concerned as to whether we would be able to fly to the conference in Eilat as our flights had already been moved from the local Tel Aviv airport to Ben Gurion.   Despite being retained at the airport for extensive questioning (don’t ask!), and having had some of our flights inexplicably cancelled, we arrived after an extremely bumpy flight in Eilat for the beginning of the Israeli Family Law conference and were joined by Anne-Marie Hutchinson’s law partner Lucy Marks..   The planned trip to Petra on Wednesday was cancelled (by that time there was a heavy snow in Jerusalem) so we had an opportunity to spend the day working and the evening mixing with the Israeli family lawyers.   Ed and Dov had managed to fix a whole afternoon for us the following day to present two panel sessions (the rest of the conference was in Hebrew) and we were able to talk on international children issues to a good-sized and very receptive audience with the help of fellow Israeli speakers.   We also hosted an afternoon reception at which we were able to meet more of the delegates.   There was a huge thirst for information about these international issues and we were greatly impressed by the interest and the quality of the Israeli lawyers.

The Charlie Hebdo news broke while were were in Israel and IAML fellows rallied in support of our French fellows and in support of free speech generally. It was a shock.

Back to London 12th January for meetings with the amazingly efficient and inspired Rachael Kelsey inter alia to finalise the new committee structure; to negotiate with Jordans the details of the webinar from Budapest and future webinars; to discuss with London fellow Suzanne Kingston the Executive Committee strategy meeting in Sicily; to meet with with Jersey fellow Barbara Corbett to plan an IAML contribution to a Jersey seminar in October.   The following week, I met with fellow Anna Worwood who is the President of the Private Client Commission of AIJA (International Association of Young Lawyers) with whom IAML has already been working, principally at the Buenos Aires meeting.   As members are chucked out of AIJA at the age of 45, AIJA is very interested in promoting IAML to those members practising family law.   We discussed opportunities for IAML promotion in Brighton in April (at a talk on same-sex partnerships), at their main meeting in London in August and next year in January at a ski venue yet to be announced at which we would have an afternoon for an IAML education slot.

The forthcoming surrogacy symposium on 18th May in London is taking shape, masterminded by President-Elect Nancy Zalusky Berg and by Anne-Marie Hutchinson.  At the Royal Courts of Justice International Committee meeting in London I was able to publicise the symposium and the forthcoming European instruments education day which were greeted with enthusiasm.

Plans for Sicily from 9th September 2015 are going well but we have Seville and Quebec City in the meantime. They will be fabulous meetings and I hope my meeting in Sicily will live up to them! Joanna and I are working hard to make sure you won’t be disappointed.

Donna (without whom by the way I would never have been able to take on this job and who is amazing) has asked me to tell all fellows that the What to Tell the Children booklet is now available in Spanish as well as English – see website.

I am greatly looking forward to seeing many of you in Seville!