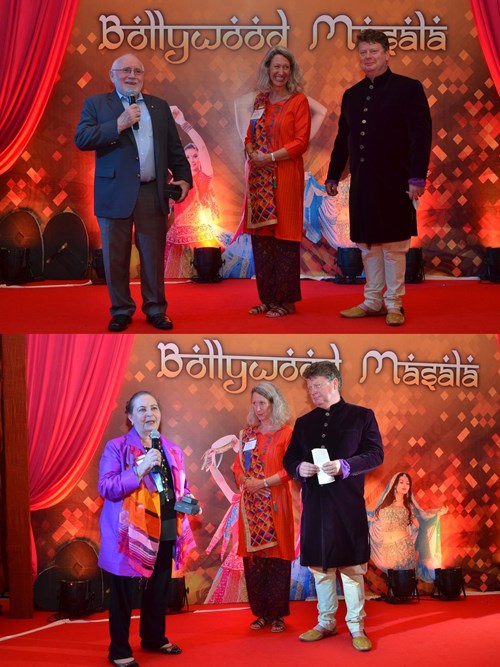 Before I ask you to read about the president’s medal winners from the New Delhi meeting, I would like to extend a very warm welcome to our new IAFL president, my great friend Nancy Zalusky Berg from Minneapolis, Minnesota. I would like to say just a few words about her!

Nancy is a wonderful lawyer and a person who really cares about the practice in international family law. She wants to make a difference in the world and this is clear from everything she does. She has already made her mark on the IAFL and will continue to build on this during her presidency.

It was Nancy who brought in the idea of having a symposium on children’s issues for local lawyers ahead of the meetings we hold in major centres. These have led on to the mini-meetings we have throughout the world and , for example, the two free-standing symposia on surrogacy in London and Hong Kong. Nancy has been at the forefront of spreading the word on our work in the area of surrogacy, assisted reproductive technology generally and forced marriage, the last of which which she is working hard to bring to the attention of legislators in the US.

Nancy is an inspiring speaker, a member of the elite US College of Family Advocates and has written and lectured extensively on family law and human rights issues. She has taken part in a wide variety of pro bono activities. Her presidency of the US chapter of IAML (as it then was) marked a move towards a greater breadth in the areas of family law explored within the Academy which has made a huge difference to our global reach.

Nancy, you will be amazing! We are lucky to have you.

I am very happy to announce that at the IAFL meeting in New Delhi from 14 to 18 September 2016 my final presidential act was to award two President’s Medals to two outstanding IAFL fellows.

The recipients were Ian Kennedy from Melbourne, Australia and Cheryl Hepfer from Maryland, USA.

I first met Ian Kennedy about 25 years ago.  He was introduced to me as one of the most influential family lawyers in the world.  That is entirely accurate.   Ian has written more extensively and brilliantly about family law issues than anyone else I know of, has spoken at very many conferences and events throughout the world – in more than 20 different countries - and has made it his business to campaign for significant changes in the practice of family law worldwide. I believe I can fairly safely say that he is indeed the most influential family lawyer of his generation.  That is no mean achievement.

As a practitioner Ian has been described as ‘Australia’s best’, particularly in complex cross-border matters. However he has had such an extraordinary international presence that it seems hardly right to talk of him as an Australian lawyer.   He is immensely knowledgeable about many aspects of family law internationally, and shares that knowledge with enormous generosity.   He is somebody who has undoubtedly taken family law onto a different level.

Ian has been a mentor and a friend to me for many years.  He has also been a tremendous supporter of IAFL, serving as a Governor from 1996 to 2002 and on the Executive Committee from 2002 to 2012.   He was our President from 2008 to 2010, taking us to game-changing meetings in Queenstown and Vancouver, notable for their exceptional education programmes, which gave a taste of excellence and set the standard thereafter.

Ian had a vision for what the Academy could be.  He restructured its administration (appointing Donna Goddard as Executive Director), implemented steps to place it in a strong financial position, introduced the concept of sponsorship to help make meetings more accessible for Fellows of all age groups, re-wrote and modernised the Bylaws, placed a major emphasis on professional development and identified and mentored the next generation of leaders.   These initiatives laid the foundation for a decade in which the size of the Academy, while maintaining the highest standards, has more than doubled and its influence and the respect in which it is held in legal, government and non-government circles around the world has multiplied and continues to grow.

As I said at the presentation of his medal, we are lucky that Ian has chosen to commit himself so fully and so wholeheartedly to IAFL; it is hardly as though he has had no other distractions.   He is, for example, a member of the Family Law section of Lawasia and a former executive member of the International Bar Association Family Law Committee as well as a member of a number of other Australian and international bodies. He has served as editor of Australian Family Lawyer since 1988 and as Australian correspondent for the Jordans publication International Family Law. Ian was Chair of the Family Law Section of the Law Council of Australia from 2005 – 2008 and was awarded the Law Council President’s Medal in 2015. This was on top of his appointment as a Member of the Order of Australia in 2004 for his services to law, legal education and national and international professional organisations.

He is such a major player in the family law world that he frankly could have done anything with his knowledge. But he has also made it his business to encourage others, to act as a mentor and to share his skills at all levels.  IAFL and the international legal community have benefitted extraordinarily from his contribution.

Cheryl is a very special friend of mine.  Indeed, she is a great friend to a huge number of people, not just IAFL fellows.   She is a very much loved figure within IAFL and has made an extraordinary contribution to the Academy over a number of years.  Cheryl’s Presidency from 2013 to 2015 marked a real shift in our focus.  She took on, as her two main new initiatives, the subjects of surrogacy (and alternative parenting generally) and forced marriage.   These were areas that put IAFL onto a different level as we became better and better known in these fields and expanded our remit to look at these areas and to bring them to the attention of the world.

Cheryl is someone who wants to bring people together, and she does it brilliantly.   Right from the start of her presidency, she made it clear that she wanted to bring on many of the younger fellows,  that she wanted to encourage much more interaction between the US and European fellows, and to concentrate on fellows from under-represented parts of the world.  To this end, she really encouraged the fellows from Central and South America.  Her first meeting, in September 2013, was in Buenos Aires, an inspired destination and a wonderful meeting.   The second meeting she organised was for Jerusalem in 2014.  Unfortunately, it became increasingly clear that it was not going to be possible to go there at that particular time and so, very graciously but with a heavy heart, she went on to organise an inspiring mini-meeting and IAFL presence at the Israeli Family Law conference in Eilat in January 2015.  The meeting was very influential, and great experiences for those of us who took part.  The numbers of first-timers at her meetings was testament to her popularity and international reach!

Cheryl always took the view that the way to raise the profile of IAFL and to bring people in from under-represented and unrepresented countries was to go out and meet them and tell them who we are.  This was what she planned to do right from the beginning - and she did it. To that end, we organised a mini meeting in Budapest in June 2014, inviting family lawyers from Central and Eastern Europe to come and find out about IAFL. The idea was to spread the word about IAFL and also to share our expertise with the local practitioners, whether or not they were likely future IAFL fellows.   This created the momentum for other mini-meetings and has triggered the necessary and very welcome expansion of our fellowship to include fellows from a good number of new jurisdictions. It has also undoubtedly raised our profile throughout the world and, very importantly, has raised awareness of issues such as the status of children born of surrogacy arrangements and the international problem of forced marriage which she has campaigned to bring to the attention of countries where it is not appropriately addressed, for example in the US. In May 2014 we held a marvellous Surrogacy Symposium in London, which attracted over 32 jurisdictions. This was the postponed symposium from the cancelled Jerusalem meeting, so it was part of Cheryl’s initiative.

Cheryl has not been one to think about herself. She thinks about the good of the Academy and about bringing others on so that succession is assured.

Cheryl has often been accompanied by her wonderful daughters, and her family has been an inspiration to her and have been a real asset. Thank you Dara and Lisa. Dara, in particular, has been there on many occasions in a major supporting role, and, on occasion,  has tried to stop Cheryl from just doing too much!

Apart from everything Cheryl has done for IAFL, she has been a first-rate and highly sought-after trial lawyer for over 40 years in her home state of Maryland and environs. She was also served as president of the American Academy of Matrimonial Lawyers, a group of 1,700 elite and accomplished family law attorneys in the US, and has always welcomed me with open arms to the wonderful AAML annual meeting in Chicago which I have attended 7 times. She is a member of the even more elite American College of Family Trial Attorneys comprising the 100 top family trial attorneys in the US. Cheryl has received a large number of accolades and honours, including very many best lawyers and super lawyers listings over a long period from a variety of bodies and publications.

Apart from her inspirational leadership as IAFL President, Cheryl was a real mentor to me.  She involved me during her presidency in planning at every level and taught me a huge amount over that two year period.  In my presidency, I was building on much of what had been begun by Cheryl, and in particular the steps to becoming without question the ‘go-to’ organisation for international family law issues.

Cheryl attended the September 2016 meeting in New Delhi even though she had fractured two vertebrae not long before.   I can just imagine the look on her doctor’s face when she said she would be going to India shortly and nobody was going to persuade her otherwise.   I hope she is aware of the huge affection that the fellowship has for her and everyone I have spoken to confirms that she is thoroughly deserving of this President’s Medal. She is, to quote her own words used by her only about others, ‘beyond fabulous’!