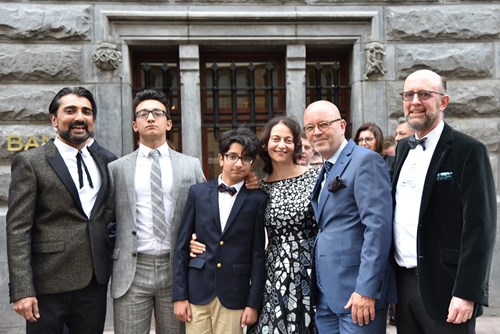 The last ‘blog’ was posted on 15 April which was the day I flew to New York for the IAFL New York mini-conference, ‘An Introduction to International Family Law’.

I should say at the outset that the time in New York was marred by the news that Donna Goddard’s very efficient assistant, Sarah Lenoir, had had a severe stroke (aged 50) and was in hospital. This was a huge shock. Luckily she has a wonderfully supportive family (immediate and extended) and many friends and now is making a good recovery, although is finding it hard to speak very fluently. She will be off work for at least 6 months. She is of course well known to many of us for all her valuable work with IAFL and I am sure that we all wish her the speediest recovery.

The New York mini-meeting was organised by president-elect Nancy Zalusky Berg and New York fellow Sylvia Goldschmidt along with many others.   This I very much hope will be the first of many.  This conference was aimed at young, non-IAFL family lawyers, with a view to sharing our expertise and looking for the cream of family lawyers to become our fellows of the future.   One of IAFL’s stated aims is to improve the practice of family law throughout the world.   We wish to publicise ourselves to a wide number of lawyers carrying out family law work throughout the US.  We chose New York because it is such a popular destination and we hope to hold another in New York and one in San Francisco within the next year.

We began on the evening of 14 April with a great reception held at the offices of Pryor Cashman in with the best view over Times Square.   This was co-hosted by Allan Mayefsky of Aronson Mayefsky & Sloan LLP and Judy Poller and Don Schuck of Pryor Cashman LLP.   We stayed at the conference venue, The Downtown Association near Wall Street, and had a seriously good education programme. Contributions from fellows Michele Katz, Eric Wrubel, Sylvia Goldschmidt, Neal Beaton, Michael Stutman, Daniel Ribacoff, Patricia Apy, Bob Arenstein, Larry Katz, Mudita Chawla, Laura Dale and Judge Dianna Gould Saltman all from the US. Sonia Heyeur attended from Canada, Daniela Horvitz Lenon from Chile, Charlotte Butruille Cardew from France, Eliza Cerutti from Brazil, Sandra Verburgt from the Netherlands and Mia Reich Sjögren from Sweden also presented and attended.  We had a good turnout from fellows generally and from a number of younger lawyers.   It was agreed that the programme was excellent and many of the delegates were most enthusiastic.  There was a real wish to hold similar meetings in the future and to encourage a greater attendance. Many thanks to all who participated and put so much energy into this.   I am constantly amazed at the number of IAFL fellows who have become mobilised over the past five years or so and are giving so much of their time and energy to IAFL.

Shortly after my return to London, the Resolution annual conference (for English family law solicitors) was held in Gateshead.  I was happy to see many IAFL fellows there, including French fellow and IAFL Counsel Isabelle Rein-Lescastereyres who was speaking on property regimes with Tim Amos QC.

Monday 25 April saw the “dry run” for the education programme in New Delhi.  Maggie Rae, Suzanne Kingston and Paul Newton met at my offices where we gathered together a number of associates from our respective firms (plus fellow Sarah Anticoni!).  We ran through the case study and got feedback from them.  They had access to the Thomson Reuters global guide to family law edited by IAFL Parliamentarian James Stewart to guide them on the law in the jurisdiction they were representing.  It was great fun and worked really well.   The education programme in New Delhi is going to be awesome!

On 27 April, solicitors Mills & Reeve held a party.  This is the firm of former IAFL President David Salter and the new chair of the family law group Resolution who is IAFL fellow Nigel Shepherd; he has been Resolution chair once already - 20 years ago!  I promise you now that I have no intention of returning as IAFL president in 20 years’ time …..

At the quarterly International Family Law Committee meeting at the Royal Courts of Justice on 10th May, I again had an opportunity to make a contribution on behalf of IAFL to let the committee know what we have done, what we have planned, what we need to do and also what role we could play in international family law issues.

On 12 May I was invited to be part of a panel for the barristers’ chambers 1 Hare Court annual seminar which attracts about 400 family law solicitors from around the country.  This is a good showcase to talk about IAFL and in particular we discussed the impact of a potential ‘Brexit’ on International Family Law and in particular European Family Law issues. Only 4 people in the audience were prepared to admit that they were planning to vote to leave the EU. (It was a shame that the vote on 23rd June went the other way. It seems that there are people out there other than family lawyers).

In this period which was the lead up to the Amsterdam meeting, I spent a number of hours each day trying to finalise the progamme for the New Delhi meeting in September.   This is always extremely time-consuming, getting the wording right, choosing the photographs, being in touch constantly with the agents to finalise the figures and the timings, liaising with Donna Goddard who was extremely patient with me, particularly when I frequently changed my mind about how I wanted matters to look on the website.   This aspect of the job really is not for the faint-hearted and just getting all of this together with my long suffering PA Joanna was a lot of work.  Without Joanna and her husband John I am not sure I would ever actually have got it done!

Tuesday 24 May, I travelled to Amsterdam for the IAFL European Chapter meeting.   Chapter President Mark Harper and his partner Hari Singh Virk had spent at least two years organising this for us and it was bound to be fabulous even though Seville in 2015 was always going to be a hard act to follow.

It was great to see everybody again at the executive dinner on the Tuesday evening.  After a very productive executive meeting on Wednesday morning, the walking tour was a wonderful re-introduction to Amsterdam, one of my favourite cities.   The extremely well-attended welcome reception started off outside and included a lovely buffet dinner served at the Sofitel The Grand Hotel.

The whole of Thursday was spent at The Hague, an hour from Amsterdam, in the Peace Palace, home to the Hague Conference (HCCH).  Here we heard from Phillipe Lortie, First Secretary to HCCH, who spoke about present and future work of HCCH and made it clear that funding is a huge issue for HCCH.  We heard about cross-border mediation in child abduction and relocation cases and the rest of the day concentrated on taking evidence abroad and cross-border judicial co-operation, finishing with an excellent panel session on the subject.

It was a brilliant idea to go to The Hague for a day. We are all aware of the significance of the  work carried out by HCCH, its international conventions which we deal with on a daily basis and its influence in the sphere of family law generally.   We have built up an increasingly close relationship with HCCH and Sandra Verburgt, herself a practitioner in The Hague, arranged for me to have lunch on 4th July with the Director General Christophe Bernasconi and the First Secretary Philip Lortie, both of whom are known to many IAFL fellows.  We talked about how to develop our relationship and support the Hague Conference with the incredibly valuable work they do; I will report on this in my next blog!

After the education programme, we had a wonderful tour of The Hague including visits to some of the smaller museums and after tea and a talk from the curator of the Mauritshuis, a tour of the Mauritshuis itself which houses many very well known paintings, such as Girl with the Pearl Earring by Johannes Vermeer.

Friday saw a continuation of the education programme with some sessions on the legal position of minors  with a very moving account of what it is like to be a child in the context of acrimonious divorce proceedings from a young woman who had been one such child.   We heard about the future of spousal support from many different jurisdictions which was fascinating and we had updating session on EU Instruments on Family Law.

On Saturday morning we heard from Professor Kees Waadijk, Professor of Comparative Sexual Orientation Law at Leiden Law School who spoke about “Legal and Social Recognition of Same Sex Love Worldwide”.  This was fascinating and he had a superb moving graph illustrating legal and social trends since the 1950s.

As expected, the President’s Dinner on Saturday evening was a wonderful extravaganza with everyone dancing enthusiastically and even in some cases attractively.

It was altogether a great meeting – huge thanks to Mark and Hari who were particularly challenged through poor Sarah Lenoir being out of action but they managed everything perfectly.

On my return to London I had a fruitful dinner with my Indian agent Sarvin Warden and Joanna and John and then a couple of days later dinner with New Delhi fellow, Pinky Anand where we discussed various  issues to do with the forthcoming meeting.

June 11th saw the Law Asia conference in Hong Kong. I had originally decided to attend but, as president-elect Nancy Zalusky Berg, Rachael Kelsey, Suzanne Kingston, Carolina Marin Pedreño and Winnie Chow would all be there to fly the flag at the IAFL surrogacy conference attached to the Lawasia meeting, I felt I really couldn’t justify it! One of my partners Michael Wells-Greco also went at the invitation of Anne-Marie Hutchinson (he has just completed a PhD entitled The Status of Children Born of International Surrogacy Arrangements). IAFL was extremely well represented, also by the Hong Kong fellows and others from around the world. I hear extremely reliable reports that the symposium was a huge success and built very well on the IAFL surrogacy symposium held in London in May 2015. Lots of contacts were made with practitioners in jurisdictions where we don’t currently have fellows which we are following up.

June 24th saw a workshop on the Future of Civil Partnerships in Cambridge organised by Jens Scherpe and colleagues from the University of Durham. This was a follow up to the conference held in July 2015 which we sponsored. Rachael Kelsey and I attended to support and provide some practitioner input to the other participants who were academics and representatives from the UK government. It was both depressing and comforting to be with some of our European lawyer colleagues the day after the Brexit vote!

A lot of work on committees has been carried out in this period. We have a new sponsorship committee; we have an academic committee which is really going places with Jens Scherpe at the helm and which Prof Marilyn Freeman, who became a fellow a year or so ago is enthusiastically contributing to. There will be lots for me to report in my next blog- work we identified at the Amsterdam meeting and which fellows are taking on, to include development of the website and our social media presence and the work that we have been doing and are still to do with studentship support. I am stopping here and will have to do this blog in two parts as so much has happened!