At the Annual Meeting in Budapest in September, 2014, President Cheryl Hepfer awarded Fellow Anne-Marie Hutchinson with the IAML President's Medal for her work in the areas of surrogacy and forced marriage. 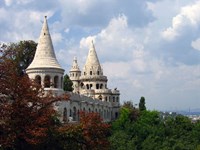 From Jerusalem to Budapest

Cheryl Hepfer talks about the revised plans for the IAML Annual Meeting 2014.

IAML have set up a Latin-American/Spanish-Speaking Forum which can deal with relevant issues affecting family lawyers in those jurisdictions.