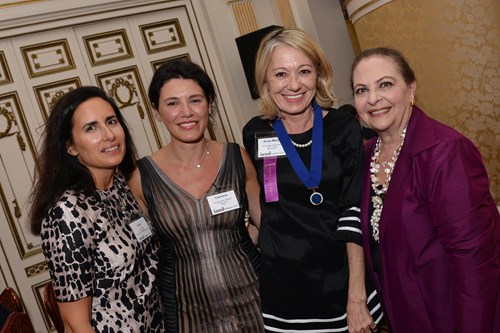 IAFL are deeply saddened by the profound loss of our European Chapter Fellow, recipient of the President’s Medal and former Parliamentarian and Governor at Large, Anne-Marie Hutchinson OBE, QC (Hon). The day before her death the Legal 500 reflected that Anne-Marie had ‘near legendary status’.

Anne-Marie inspired and led the IAFL's work on Surrogacy / ARTS / Parentage and Forced Marriage and worked tirelessly on many of our committees. In 2014, IAFL President Cheryl Hepfer awarded her the President’s Medal in recognition of her work in these areas, and in respect of her contributions to the (then) IAML and the world community at large.

Anne-Marie also encouraged and supported us to foster relations with other organisations such as the Council of the European Union, the HCCH, the Aire Centre, Tahirih Justice Center, LawAsia and the World Congress on Family Law and Children’s Rights. She was unfailingly generous with her time, knowledge and contacts and shared her expertise at many IAFL open conferences, as well as our own Chapter and IAFL meetings - too many to name individually here.

There are many jurisdictions in which we now have Fellows only thanks to Anne-Marie. Whenever she came across a good practitioner (and her cases were legendary for covering every corner of the globe), she encouraged them to apply. She was an incredible ambassador for the IAFL and we owe her an enormous debt of gratitude for all she did for us.

We send our condolences to her family, colleagues at Dawson Cornwell and friends throughout the world.

Rest in peace, our dear friend.