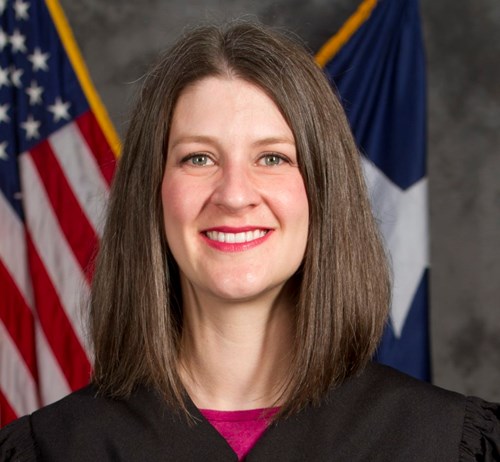 Chief Justice of the United States John G. Roberts Jr. will present the award to Judge Miskel later this year. Details of the awards ceremony have not been finalized.

Judge Miskel, of the 470th District Court in Collin County, is an expert in bringing technology to courts. In March, during the pandemic, she held the state’s first fully remote hearing and the first fully virtual bench trial. Since then Texas’ judges, many of whom were trained by Judge Miskel, have conducted more than 175,000 virtual hearings.

Judge Miskel frequently writes and speaks on legal technology topics such as electronic evidence, e-discovery, data theft, interception of communications, and online impersonation. She has a mechanical engineering degree from Stanford University and serves on the Computer & Technology Section Council of the State Bar of Texas.

“The National Center is honored to present the Rehnquist Award to an innovative state court judge who met the challenge of using technology to make jury trials a reality during the pandemic,” NCSC President Mary McQueen said. “Judge Miskel is not only a trailblazer in this area, but an extraordinary judge who has been recognized for her outstanding work on the bench.”

Judge Miskel received her law degree from Harvard Law School and has served as a district judge since her court was created in 2015. She is a member of the Texas Judicial Council, the policy-making body for the state judiciary. Judge Miskel is board certified in family law by the Texas Board of Legal Specialization. In December, she will also be board certified in child welfare law.

“In these historically challenging times, a few true leaders have come to the fore. Judge Miskel is at the head and worthy of the award named in honor of Chief Justice William H. Rehnquist,” Texas Chief Justice Nathan Hecht and Texas State Court Administrator David Slayton said in a nomination letter. “We think Chief Justice Rehnquist would be proud, as we are, of Judge Miskel’s outstanding qualities of judicial excellence demonstrated most powerfully over the past three months but also over her legal and judicial career.”

The National Center for State Courts, headquartered in Williamsburg, Va., is a nonprofit court organization dedicated to improving the administration of justice by providing leadership and service to the state courts. Founded in 1971 by the Conference of Chief Justices and Chief Justice of the United States Warren E. Burger, NCSC provides education, training, technology, management, and research services to the nation’s state courts.