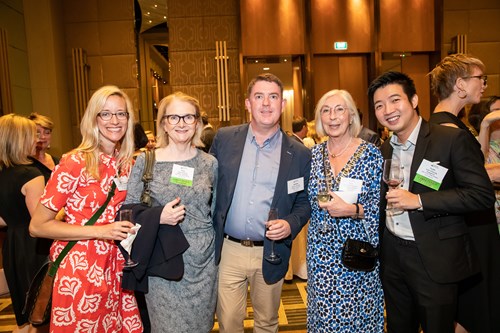 In June 2018 I was elected President of the IAFL and took over from Nancy Zalusky Berg, not an easy task. Nancy's meeting in Tokyo was a big success as were her two years as President so thank you again Nancy for what you do and have done for the IAFL.

It is quite a challenge to take over the presidency of IAFL and it took a while before I had gotten used to the fact that it was now up to me, together with many others, to make decisions and plan for the future.

The main goal for me is to do my very best to keep moving the organisation forward in the same positive way as earlier Presidents and others have done.

Before being elected I had already started to plan for the two meetings I am responsible for. My first meeting was recently held in Melbourne, and the next will take place fairly close to my own home, in Oslo, Norway.

Melbourne was a natural choice for me since we had just started the Asia-Pacific Chapter. We have worked hard to form the chapter, not least Tom Sasser who has been the liason for that project.

Melbourne is a beautiful city and I had lots of help from the Melbourne fellows. They were so enthusiastic and helpful to make the meeting a great experience, and they succeeded.

You may know that Melbourne was named to be the top liveable city in the world but this has recently been passed by my second home town, Vienna. That tells you something about the city.

The Oslo meeting will be in early June 2020. Last year, at the beginning of July, I travelled to Oslo together with Donna and Ali for inspection and planning. We met with hotel people as well as local agents and we had our fellow Else-Marie Merckoll who lives in Oslo to guide and help.

Oslo promises to be a great meeting. It is a also a wonderful city and there are lots of things going on. By the time we are there for our meeting, many interesting projects will be finalised such as the new Munch Museum. The weather should be fairly warm and nice and the evenings and nights long and light.

In September, we had a very well organised and productive meeting in Stuttgart. Daniela Kreidler-Pleus and her husband Rüdiger had prepared a lovely meeting and they had even been able to order really good weather.

Shortly thereafter it was time for me to go to ERA´s meeting in Trier and the annual Family Law Conference. It had a very good educational program and was a perfect place to meet family lawyers from other countries, not least Eastern European countries. The meeting in Trier was even postponed a few weeks because of our meeting in Stuttgart. That was really helpful for us and extremely kind of the organisers. It also tells us something about our organisation and the importance and respect we have been able to achieve.

Soon after that I travelled to Chicago for my first AAML meeting. Impressive and interesting and again a very good place to meet fellows and other non fellows to spread our word and talk about our work and aims.

Believe it or not but from there I flew to Dubai, together with a few others from the Executive team to take part in a Family Law Conference organised by IAFL. It was aimed mainly at non fellows from that area. Maggie Rae together with others among them William Longrigg had put together an outstanding programme with participants from many countries in that region, such as Oman, Pakistan, Egypt, Bahrain, Lebanon, India and Turkey. It turned out to be a real success thanks to the organisers and not least Ali Massey who handled all the complicated organisational matters perfectly.

The aim for us when we arrange conferences like this is to make IAFL better known, to raise our status and also to educate lawyers in areas where there might not be education and information about International Family Law. In the end we want skilled fellows from all parts of the world and this is one way to do it. We are now planning a conference like the one in Dubai, this time in Oman.

At the end of November I travelled to the Hague where I had a lunch meeting, in which also Sandra Verburgt took part, with Philippe Lortie and Christophe Bernasconi. The meeting is an annual event and our aim is to build and maintain close contacts with the Hague Commission and its Permanent Bureau. As you may know Philippe Lortie lectures often at our meetings.

Lately, I went to Brussels together with William Massey, President of the European Chapter, and Soma Kölcsényi, fellow from Budapest. We were invited by the European Justice Network. William Massey gave a brilliant presentation of the IAFL and we had the opportunity to meet and talk to participants from quite a few countries who showed interest for our organisation. I am sure that our presence made IAFL more known and of interest.

The meeting in Melbourne turned out very well and we had more participants than I had expected. It may have been a bit courageous to take IAFL for an AGM so far away for many of us but it went really well.

There was intense planning for the meeting as always but with help from Ali and Donna as well as my colleagues on the exec and the Melbourne fellows we were able to make it a lovely meeting.

A one day Introduction to International Family Law Conference was held in Sydney on the Monday of the same week as the Melbourne meeting. The attendance there also turned out well. Max Meyer, the Asia Pacific President, and his team had prepared a very interesting day. It was held in the beautiful Darling Harbour in ”plein soleil” and everybody seemed to enjoy and learn.

On the Tuesday before the Annual meeting we held a so called Leadership Day for fellows who have shown interest in taking a position in the IAFL. At the same time the newly formed Reference Group, chaired by Cheryl Hepfer, held their first meeting.

The educational program in Melbourne was organised by Amanda Humphreys together with Alexandre Boiché and Fredric Renström and it turned out to be well done and very interesting. The material can be found on the web site.

After Melbourne we held an Introduction to International Family Law Conference in Milan. The event was sold out very early and there were quite a few who were not able to take part due to that. These conferences are very popular and attract especially younger lawyers but also fellows.

To be a President of the IAFL is not only about being interested in meetings and travels, even though it may look like that. It is sometimes quite hectic and difficult not least as we all combine it with our work.

Also, the IAFL do a lot more than arrange and go to meetings of different kinds. A very good example of important work is the Amicus Committee work, chaired by Ed Freedman.

Lots of Committee work has been done during this year. It is important work but also a very good way to have fellows and especially younger fellows become active and involved in the organisation.

Another good example is our work to recruit new fellows in Africa. Rachael Kelsey has made an enormous effort to go out there several times, a few times also accompanied by William Longrigg and Nancy Zalusky Berg.

The organisation is growing. In parts of the world where we are not yet represented we have fellows, like Rachael Kelsey, Nancy Zalusky Berg, Carolina Marín Pedreño and others who go out and speak for the IAFL. I am confident that in a few years time we will be much better represented in for example Africa and South America as well as in Asia.

Almost every day I have something IAFL to do deal with, be it fellows, other organisations, or decisions to make within our organisation, and I am lucky to have two brilliant ladies, Donna and Ali to help me. We have weekly conversations if not more and on top of that a group of us have a teleconference every second week.

To be honest I could not have imagined how much there is to deal with. Luckily enough I enjoy it anyway. It is just a wonderful organisation and the team work is great. Almost a year has passed now since I took over the presidency and it has been a very interesting experience. I look forward to another year and the final meeting in Oslo, June 2020.

Now, next on the agenda is the US Chapter meeting in San Francisco which promises to be lovely. It is organised by Jorge Cestero in his capacity as USA Chapter President. We all look forward to that.