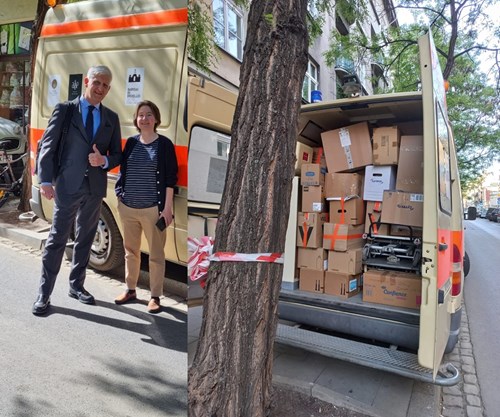 In March IAFL established the IAFL Emergency Relief Committee for Ukraine. The committee held several meetings since and various humanitarian aid activities have been undertaken. In this blog I will give you an update of what we have been doing.

Practical humanitarian aid (delivery of medical supplies and goods - Bonnie Brown sent boots!) has been provided by several fellows to fellow Joanna Wsolek, who co-ordinates the humanitarian aid on behalf of the Kraków Bar to Ukrainian people through the local bar associations in Ukraine (among other the Rivne Bar)

One success story is highlighted here. A humanitarian initiative that arose directly out of the formation of our IAFL Committee was the provision of an 2nd hand ambulance to Ukraine with the direct involvement of two of our Fellows, Joanna Wsolek (Poland) and Veronique Chauveau (France) and her son, who is a doctor. Funding for the ambulance was received from the French Order of the Brussels Bar Association. Veronique’s sons spent the Easter weekend driving the ambulance through Germany to Kraków where they met and handed the keys over to Joanna and the Dean of the Kraków Bar. Joanna and the Dean drove the ambulance over the border into Ukraine to Mykolaiv, a city in Southern Ukraine close to the Black Sea. The ambulance was given to the Mykolaiv Bar who were delivering it onward to the doctors in Mykolaiv. The Committee recognises that this was international cooperation at its best; the German autobahn fees were waived; the border control police cooperated. Equally, it tells of collaboration between the legal and medical professions.

Meanwhile a second ambulance was delivered to Ukraine on Friday 20 May 2022.

Recently I spoke with fellow Katell Drouet-Bassou, who is Chair of the CCBE Family and Succession Law Committee. CCBE is representing the national bar associations in Europe. We have spoken on the coordination of the efforts of both our organisations regarding children fleeing Ukraine, in particular to collect and share best practices with member bar associations in Europe on matters involving children, who have fled Ukraine and are now in other European jurisdictions. Also we have spoken about sharing the IAFL blogs of this committee with the CCBE member bars (see initiative below).

The FBE has been assisting the Ukrainian National Bar Association and organised a webinar on 20 April 2022, in which several IAFL fellows participated. Today the FBE has 250 member Bars, representing more than 1,000,000 lawyers. I will see whether the FBE may want to share the IAFL blogs on Ukraine among their members as well. IAFL European Chapter Vice President Alice Meier-Bourdeau and I will attend the FBE Congress in Sofia later this month.

Blog Initiative from Reporters on the Ground in Ukraine and Poland

The fellows, who attended the IAFL European Chapter AGM on 14 May 2022 have witnessed firsthand the impressive and touching statements made by Ukrainian fellow Oksana Voynarovska and Polish fellows Joanna Wsolek and Natalia Olowska-Czajka. They spoke about their day-to-day experiences in Ukraine and Poland and how the situation affected their personal lives. Natalia has opened her home for a Ukrainian family and suddenly found herself in a situation, where she and her husband were no longer alone in their home. Joanna drove a 2nd hand ambulance into Ukraine and Oksana moved temporarily from Kiev to western Ukraine, while her husband is still in Kiev, providing humanitarian aid to others in need. All three spoke about their strong determination to continue to help other Ukrainians and Oksana made a moving plea, asking all of us not to forget the Ukrainian people.

Oksana: “We decided not to give up and to fight”, speaking at the AGM of the IAFL European Chapter. “My biggest fear is that the world is growing tired of the tragedy in Ukraine, the deaths of children are becoming mere statistics - please do not forget us - please stand with Ukraine”

The Committee decided to take up the glove. We will continue to support our Ukrainian fellows, doing the best we can to prevent Oksana’s fear becoming reality. From now on our reporters on the ground Oksana, Joanna and Natalia will write each month on a rotation basis a blog about their experiences in Ukraine and Poland.