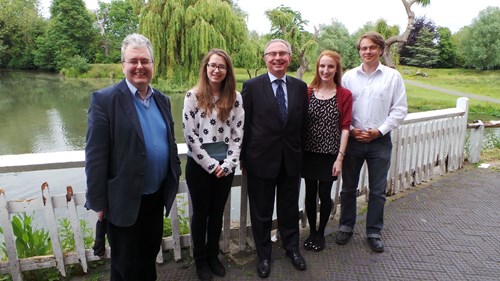 This year, there were a record number of applicants (13 candidates) from whom 7 were shortlisted for interviewing.  The selection process was carried out by Nick McBride (Director of Studies in Law and Fellow of Pembroke College), Jens Scherpe (IAML Fellow and Fellow of Caius College), Sir Alan Ward and David Salter.

The two prize-winning essays on “Inferior Fathers?:  The unmarried father in English law” and “How far is it possible both to protect adolescents and to respect their rights?” respectively may be accessed using the links below:

Alexandra is to spend her internship with Laura Dale in Houston, whilst Anna travels to Australia to take up her studentship with Ian Kennedy AM in Melbourne.  Reports on the studentships will appear in due course on the website.  The two luck winners are pictured below with Nick, Jens and David.  The IAML wishes to extend its thanks in particular to Nick who works very hard on our behalf in administering the studentship scheme.