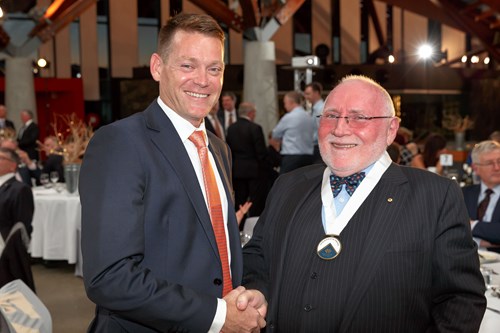 IAML would like to congratulate Past President Ian Kennedy AM who has been awarded the Law Council of Australia President's Medal for 2015.

The Law Council is the peak body of the Australian profession, comprising the Law Societies and Bar Associations of each state and territory and represents 65,000 lawyers nationally.

The award was conferred at a ceremony in Canberra on 27 November and recognises a lawyer who is "an outstanding example to the Australian legal profession and those who might seek to join its ranks; and has brought credit to the profession through a commitment to the law which has been both personal and professional".

Ian is particularly delighted to be the first specialist family lawyer to receive this honour.

The award recognised both Ian's national and international contributions.  The President, in his speech said, inter alia: "In 1996 Ian was appointed a Governor of the International Academy of Matrimonial Lawyers and served on its Executive until 2012 - including as President from 2008 to 2010 (the only person from the southern hemisphere to hold that position)" and described Ian's contributions to the development of family law and the professional standards of those who practice it as "inspirational".